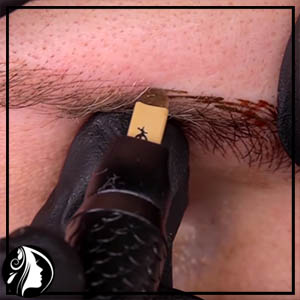 Are you looking for a fuller eyebrow, yet eye pencils are letting you down? Now confused between microblading or powder brows?

The best thing is first to compare microblading versus powder brows.

The two processes are almost similar, and they give a long-lasting solution to fluffy eyebrows. However, there is a little distinction in how the tools used deposit dye into the skin.

The Difference Between Microblading & Powder Brows

The two brow treatment techniques aren’t so different from each other. The two of them help to fill sparse brows. Let us look at the two treatments separately.

Microblading is an eyebrow correction method that uses tiny needles to deposit dye into the skin. The process involves using a handheld tool to make hair-like strokes on the brow line.

Notably, the too used in microblading ink deposits slightly above the dermis. This creates a semi-permanent illusion of a fluffy brow.
This technique mimics the natural hairs, only that they look fluffier.

Notably, microblading is ideal for a person with fair skin. With oily skins, the strokes fade faster. As a result, you will need more touch-ups.

All in all, ensure that your artist is qualified and has microblading certification from the relevant authorities. This way, it assures you of getting professional services.

Powder brows are also known as microshading or ombre brows. This is a different method of achieving fuller eyebrows.

Actually, this technique uses almost a similar procedure as microblading with a slight deviation.

Instead of using strokes to enhance the eyebrows, microshading makes dashes and dots on the target area. The needles also deposit the pigment into the skin, long-lasting the results.

Fortunately, this method favors oily-skinned individuals more than microblading does.

Both methods are relatively cheap. However, the cost depends on the number of sessions needed to achieve your desired look.

For instance, microblading requires multiple sessions to get the full effect. On the other hand, powder brows may only need one session, and you are through.

Which Is Better for Eyebror Makeup?

Both microblading and powder brows are great options for getting fuller brows. But which one is better?

Well, it’s all a matter of an individual’s taste. Some people prefer microblading, while others like powder brows.

If you want to have a fuller brow but don’t want to spend too much money, microshading may be the best option.

However, if you want something permanent, then powderbrows is the way to go. It all depends on your money and value your time and money.

Can You Get Powder Brows After Microblading?

Yes, you can get powder brows after microblading. In fact, it is recommended by some experts.

But, remember that the color won’t match perfectly. It might even look darker than what you had before.

Powder brows last longer than microblading. However, they are not guaranteed to stay indefinitely.

You should expect to see fading within 3 months. Notably, microblading lasts up to 2 years, while microshading can last up to 4 years.