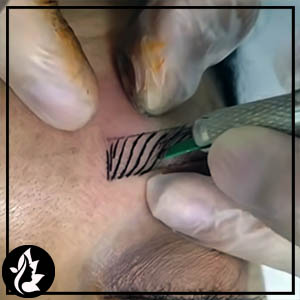 Every individual who goes for microblading treatment dreads a process that goes wrong. At the same time, seeing your microblading fading could scare the hell out of any client.

The dye used in microblading can last up to 30 months.

However, the pigment may seem to fade away during the healing process.

Why My Microbladed Eyebrows Fading?

One reason why most folks go for microblading is the permanent fuller brows. Consequently, during the microblading process, the tool cuts the skin to deposit the dye.

These cuts trigger a self-healing process as in any other injury.

As the skin heals, it also tries to eliminate the foreign substance – pigment. As a result, the artwork starts looking lighter, and this causes panic.

At the beginning of the microblading healing process, the new skin cells make the pigment fade. However, this should not upset you since the process involves some touch-up sessions.

With proper after-treatment care, your microbladed eyebrow will not look faded at all.

Sensitivities or allergies to the pigment are also possible. When this happens, your body responds as though they’re fighting an infection, pushing the pigment out. The easiest way to avoid this is to make sure your microblading artist only uses high-quality dyes.

Also, inform them about any sensitivity you might have before the operation. Nickel is the most prevalent allergy, so let your attendant know if this is anything you’re allergic to.

How To Keep Microblading From Fading

Getting a specialist work on your eyebrow is ensures that you get the best service. However, how you treat your skin determines the quality of the end product.
Microblading aftercare is similar to that of traditional tattooing procedures.

After 2 hours, wipe the area with a cotton swab soaked in sterile water. Any extra color on your brows will be removed using this method. It will also maintain sterility in the region.

It takes 7 to 14 days for the skin to seem healed and the microblading pigment to fade to the desired shade. Here is a quick guide on how to care for microbladed eyebrows.

How Do You Fix Microblading Fading?

Even though microblading is a lasting eyebrow treatment, when fading happens, correction is possible.

If your eyebrows have healed with a red, purple, or blue tint color correction is possible.

The first step is to lighten the brow to the point where it is nearly non-existent by removing all colors.
The second is to color-correct the brow that has changed hues.

In case of microblading fading after the first treatment, don’t panic. It’s a typical scenario as the skin cells regenerate.

All the same, if you feel the results aren’t up to your expectations, color correction is also possible.