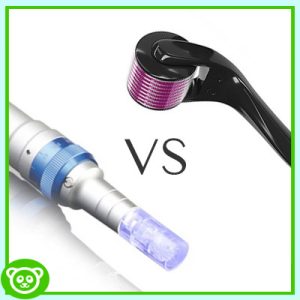 Before we go to differentiate a dermaroller with a dermapen we need to know what these products are. This article about Dermapen vs Dermaroller will help you to understand yourself what is a dermaroller, a dermapen and dermarolling or microneedling?

Probably you have heard the term Acupuncture, a few hundreds of years ago. The Chinese people used this therapy for both skin beautification as well as to remove skin problems.

Now with the advancement of science and technology, the dermaroller and dermapen has come into play. It is noted that dermaroller is the older version of dermapen, only a few years back to come in market. We are always in search of best micro needling device but how to get?

The act of a dermaroller is called dermarolling. But in case of dermapen we cannot say dermarolling better we say microneedling. Though the goal of both dermapen treatment and derma roller treatment is same.

The dermapen effects have described as detailed below.

So far we have discussed all about dermaroller bad or negative sides of its performance. Let us now see what happens with the use of a dermapen.

So to treat a patient you need several dermarollers which not at all possible. Dermapen aftercare is also very important than the device itself.

Truly speaking dermaroller is a manual tool while the dermapen is a semi-auto machine for microneedling. It has been experimentally found that when you perfectly roll a dermaroller on the skin you can puncture maximum 300-400 micro holes per second.

Though it seems to be a lot, that’s not true. But when you glide a dermapen perfectly over the skin it can puncture maximum 1300 micro holes per second showing amazing result.

Final Words on Dermapen vs Dermaroller:

You have already noticed the advantages of dermapen over the dermaroller. A dermapen is safer, less time consumer and versatile instrument than a dermaroller and a dermapen would be better for your skin.

Both dermaroller and dermapen are being used for beautification purposes as well as reducing or removing most common skin issues. If you have a good budget ($100 – $150 dollar) to butify your skin then I suggest you to use best quality dermapen instead of dermaroller.